Here is a little scenario I wrote for Legends of the High Seas, enjoy! Feel free to post feedback or comments!

Whenever a ship sinks, runs aground or capsizes not everything sinks down to Davey Jones locker and instead washes ashore after floating in the ocean along with debris from the ship. After a recent incident with a ship (sunk in battle, capsized due to a storm, etc..) several items has washed ashore waiting to be claimed. These goods have not gone unnoticed by two crews in the area that has been following the wreckage ashore hoping to find something worthwhile.

The Gaming Area
The game is played on a 4’x4’ board that represents an area of the shoreline that has debris washed ashore. Place wreckage, rocks within 24” of one board edge to represent the shoreline and the opposite board edge is considered the tree line up to about 24” from the opposite edge . Place D6+2 makers on the table, all markers must be 12” from the table edge and 8” from one another.

Starting Positions:
Players roll off for the edges opposite of the water and tree line as they are searching the shores for salvage. Players will then divide their crew into two groups to represent search parties scattered about. Roll a d6, 1-3 the first search party may be deployed otherwise on a 4-6 the second search party is placed on the table. The group that is not deployed will be held in reserve and arrive later in the game (see “Late to the Party”)

Initiative
Players roll to see who goes first and the highest score wins the Initiative. IF there is a tie, the Crew with the lowest Infamy goes first.

Winning the Game
The Crew which gets the most loot tokens off the board wins or when one Crew has either Routed or has been wiped out. In the event that a Crew Routes or is wiped out all loot markers that was on the table (including those being held by the routed crew) go to the winner of the game. Only the markers that have been removed from the table may be claimed by the withdrawing crew in the event they Rout or are wiped out.

Experience:
Survival: Each Hero or Henchman who survives the game gains 1 Experience point – this applies even if the fighter is taken out of action, so long as he survives and lives to fight another day!

Leadership: The Captain of the victorious Crew gains 1 Experience point.

Kills: Heroes (not Henchmen) gain 1 Experience point for every enemy model they personally put out of action.

Loot: The Hero or Henchman group who gets loot counter off the table gains +1 Experience Point
Booty:
Follow the normal rules as listed in the Income and Trading section for Earning Booty. The winner may claim an additional d6 roll. Players also roll on the Salvage Table to determine what they recovered from the shoreline.

Salvage Markers – At the end of the Movement phase, any model in contact with a loot marker may retrieve the marker. If one model carries a marker they may only move at 3”, if a second model is in contact with the marker they may move the full 6”. Any model with a loot marker may not shoot or charge in combat until they drop the loot marker. Markers may be dropped at the start of the movement phase and the model may move, shoot and fight normally. If a model is charged, the model will put down the loot marker to defend themselves in combat. If a model makes a “Hit the Deck!” check and fails, they will drop the loot counter and then move to cover. Once a model(s) reaches a table edge with a loot counter they are removed from the game and will not return as they are taking their prize to the ship.

Late to the Party: At the start of the second turn, roll for each model in the search party. On a 4+ that model may be placed on the table measuring their movement from the edge of the table. The model may act, shoot and charge just like any other model.

Salvage Chart (roll once for each loot counter you remove from the table):

2 Survivor: You managed to rescue a crew member from the wrecked ship that was unconcious and he offers to join your crew in gratitude after they recover. Roll a d6:
1-5 Add a Free Henchman (Able Seaman, Rouge or Mariner based on your crew type). They are unarmed and must be equipped from your stash.
6 Hired Hand: Offers to help your crew for free for the first game waving his hire fee. You must continue to pay their upkeep after each game after the first.

3 Treasure Map: A treasure map was kept safe in a bottle that washed ashore. Roll to see what type of map you got.

4 Keg of Grog: Your crew finds a keg of grog that they enjoy as a reward for a hard days work. -1 to Mutanity Checks if they happen after this game.

5 Bottle of Jamaican Rum: A bottle of fine rum washes ashore that was recovered.

9 Good Timber: You managed to find some timber of high quality that is excellent for ship repairs. Allows 1 reroll on Hull Repairs (one use only)
10 Crate of Trade Goods: A small crate full of trinkets or general merchandise can be sold off worth D6 Doubloons.

11 Lost Pet: Someone’s animal managed to survive the catastrophe and has managed to make it ashore. Your crew was able to recover the animal and nurse them back to health Roll the dice 1-3 Monkey, 4-6 Parrot. Randomly determine which hero in your Crew they will attach to.

12 Exquisite Weapon: roll a dice 1-3 Sword or 4-6 flintlock pistol. Add 1 to your Fighting or Shooting Roll. The weapon was kept safe in a wooden case that was water tight and washed ashore undamaged. Pick a hero you wish to have it or you can sell it at 3x the base value. 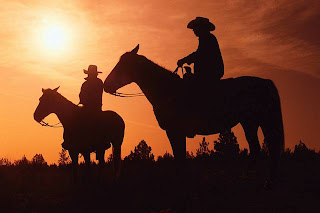 A posse of Cowboys has a unique and diverse offering compared to other posse groups. They don’t suffer from the weaker choices like the Lawmen and the general lack of Shootin’ of the Outlaws. At a glance you have:

A look at the Herd:

Trail Boss: He comes with 1/1 of FA/FT, 4+ for Shootin’, Grit and Fighting. Best weapon options are a repeating rifle or heavy pistol to take advantage of his good Shootin’ stats. For amusement you could include a lasso if you have the cash to spare.

Greenhorns: Average for the game, give them some six-guns and call it a day. As they develop then you can alter their gear. If after the first game you could invest in shotguns for them or if their Shootin’ stat increases you could consider a repeating rifle or heavy pistol instead.

Buckaroos: Up to three, 4+ Shootin’, which is crazy compared to a Greenhorn that is the right hand of the Trail boss. Repeating rifles are a choice item for these guys. You could go with a six-gun in a crunch or a standard rifle if you want to develop a sniper. A lasso again isn’t a bad option for them if you have the need and spare cash.

Cowpokes: Give them six-guns and use them as filler for the posse.

After your first game you will want to add some more hands to the posse. This leaves you with adding some extra henchmen or taking on hired guns. Henchmen hands down is the better investment as they require no upkeep and always add more to your gang in the long term. Bulking up on Cowpokes can give you enough to survive longer in the gang to avoid taking pluck tests as well as gives a few extra gun.

If you looking for Hired Guns to join your posse then you should consider what elements that they can bring to the table to help build up your gang. The need for hired guns is slightly lower on the need basis than an Outlaw gang but a tad higher than a Lawmen posse. To me the supporting hired guns are where you will find your best allies.

The Explosives Expert or Scout can double as an extra sniper for your posse.

Using the Soiled Dove is a great distraction.

A Tejano Guide could help you find rare items and allow 3 models to make a bonus move before the game.

The Prospector or Prize Fighter could earn you a little extra cash between games.

Ready to Hit the Trail!

The two builds I have come up with is this:

Concept here is simple. Deploy, move 4 of your lasso armed models forward. Try to nail targets with a lasso in the movement phase, drag them forward, charge them with Greenhorns and Cowpokes or shoot the snot out of them. Beat the crap out of the target while entangled with a Fighting of 1 your target is easy prey with a few good dice rolls. If all else fails, you fan your six-guns and then do the lasso gag again. With 4 lasso users you should be able to hit with 50% on average. So, focus your plan on taking out two close to one another to support the posse as a whole. The key to the lasso gag is you can use them during the movement phase and thus cause your target if caught in the lasso to be unable to do anything.

With the leftover cash you can buy another Cowpoke a rifle or perhaps buy a hand weapon for the Trail Boss. The concept is to deploy your rifles to good spots or at least be ready to move to a prime spot early in the game. The rest of the posse bands together and engages close range to anything that gets near your shooters. Usually they will remain in cover or out of sight until something is in range.

Early on try too round out your posse with extra members to bulk up your numbers to avoid taking Pluck tests. Arm up Cowpokes with six-shooters and as they and your Greenhorns get a boost to their Shootin’ stat they can be upgraded to a repeating rifle more than likely to give you the best range and firepower for your money, recycle the six-shooters back into your stash or keep them as a backup weapon in case something goes wrong.

Cowboys mostly have a demand for the hired hands that support the game in your weaker areas rather than the more combat oriented ones. Consider adding hired hands that will boost your posse’s performance in the game or help you between games.